Cavitation propeller and hydrofoils or foils 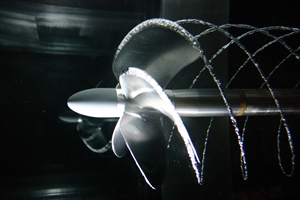 Cavitation is primarily an ebullition of water:

Viewing the surface pressure of marine turbine in the software Heliciel: 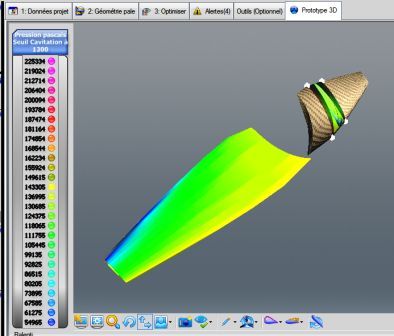 What resources do we have to avoid cavitation? : See more closely how the cavitation appears and how to detect when designing a propeller:

It is therefore essential to assess whether cavitation is concentrated around the point of lift or if it applies to the entire surface of the profile. To better assess the risk of loss of performance, thus Heliciel differentiates three types of depressions on the propeller blade: Evolution curves risk of cavitations drag, lift concentrated and distributed according to the rotational speed in Tab heliciel optimize / (multiple analysis operating points) : 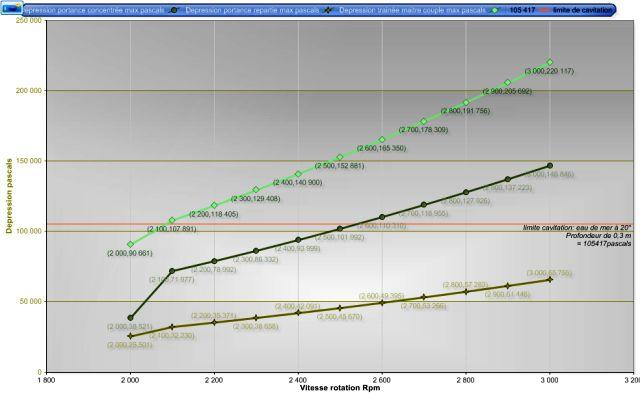 Viewing the risk of cavitation (drag, lift distributed, concentrated lift) for each element from the foot to the end of the blade.

How The profile shape manages the distribution of depression on the upper surface so the tendency to cavitation Profile?

the lift applied to the surface of the upper surface of blade gives us the depression due to the lift. But as we have seen earlier, this lift is not uniformly applied on the upper surface, in fact, the point of application of the lift on the profiles is usually located around 0.25 times the profile chord starting from the leading edge.(Heliciel software uses data profiles to find the point of lift).

extract from the database HELICIEL

Depression is concentrated around the point of lift. We can roughly estimate that the depression will be equal to the lift applied symmetrically around the point of lift. For a point lift at 0.25 times the rope: 0.25 front and 0.25 rear, which reduce the surface action 0.5 times the upper surface of the lift if the point is 0.25 times the rope. Depression will be max: Depression = (Lift force N) / (0.5 X surface_extrados). If the point of application of the lift of the profile is located at of the leading edge 0.35, héliciel considers that the suction zone is concentrated (0.35 X 2) = 0.7 times the area of ​​the upper surface. We just imagine that a profile generating its lift closest to the center of the rope, (0.5) distribute its lift on the entire surface of the upper, so the depression will be low. Profiles with a lift point near the center are less prone to cavitation!

Several theories explain the phenomenon of lift: ome expressed that the phenomenon is not sufficient to explain all the lift forces. In any case, one thing is certain is that a vacuum is generated on the upper surface and pressure is generated on the underside. (If the angle of incidence generates lift). The fact is that the lift is concentrated in the area between the edge (just after) and the point where the fluid is no longer forced to change direction. The area where the fluid is no longer obliged to change direction, it is the area of ​​maximum thickness if the incidence (attack angle) is zero.

The suction zone is distributed, from leading edge (next) to the point where the upper surface is parallel to the fluid stream. The lift point is in the middle of this area. The cavitation zone is therefore around the point of lift: In the curve of lift coefficient on a profile in the software Heliciel (below), The pink curve shows the distribution of depression on the upper surface. Point 0 of the x-axis corresponds to the leading edge and point 1 corresponds to the trailing edge. The blue curve represents the intrados. (The y-axis is reversed: positive values under the x-axis) If one angle of incidence is given to the profile, the point where the suction becomes parallel to the fluid, approaches of the leading edge and reduces the area where the lift is concentrated. Thus depression focuses and cavitation will appear more e 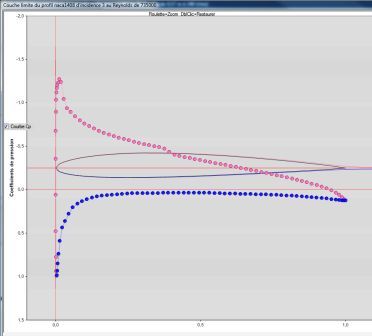 asily. If you look at a profile, and its upper surface, you know that the point of lift is approximately halfway between the leading edge and the area parallel to the flow: 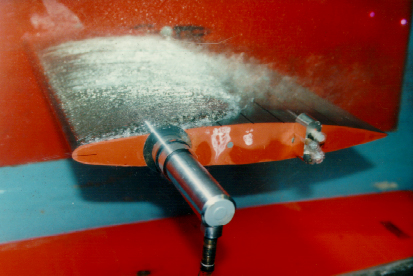 More the area of max thickness is moved back, the more particles continue to accelerate a long time, thus distributing their area of ​​depression over a larger area. The same lift force spread over a large surface generates less depression concentrated. Profiles of the propeller blades operating in the water should have a max thickness rearmost possible so as not cavitate too soon. Below is a profile lift of high concentration that might cavitate easily :

Below is a profile of low concentration but the rear lift may generate a lot of drag because of its thickness! This profile may be not cavitate because of the lift but because of its drag.

Below is a profile which spread the best its lift without creating too much drag:

(extracted from the database Heliciel software): 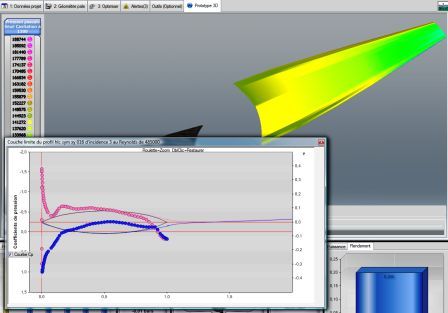 Photo of a foil with a thickness max on the rear distributing its lift. better than the rudder (vertical) which supports it. It is a good example of the importance of the choice of profiles 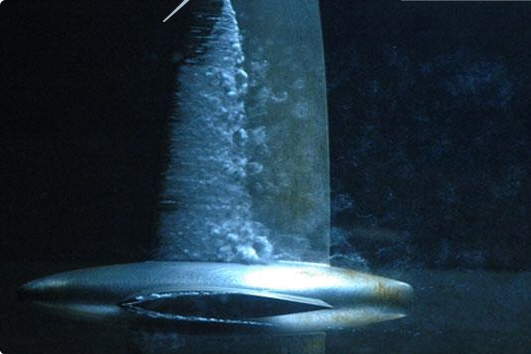 Cavitation is a complex topic that is approached only superficially on this page. For further reading I invite you to consult the thesis on cavitation from Mr Surasak PHOEMSAPTHAWEE which is in my humble opinion a useful reference.