The impeller is similar to a screw which converts the rotational motion of the motor in motion propulsion, translation of the aircraft or boat ; it transforms circular motion into linear motion,as the group consisting of wheels and transmission components for land vehicles. But the latter are supported on a solid surface(road, rail) While the propeller is based on a fluid medium, so deformable. The propeller is similar to a screw, but the parallel-screw propeller is only valid to some extent. If the propeller could be considered as the bolt is screwed into a nut, it would have only one travel speed for a given speed of rotation. In fact fluency allows the propeller to rotate while the translational speed of the aircraft is not one that matches the pitch. In short, from the standpoint of the propeller, the "elasticity" of the fluid has the advantage: range, operational flexibility propeller,   and disadvantage: loss of efficiency (slip).

The change in pitch of the propeller plane:

The transmission system is theoretically a gearbox which is not to be considered in aviation -too heavy and must remove the engine torque to move from one gear to another. It remains to consider the propeller to get the constancy of the product mentioned above, we have several elements: the blade surface, the general shape of their profiles the curvature of the profile, the pitch of the blade. We can act on the blade area either by varying the diameter (for example, the blade foot which is screwed or unscrewed), or by varying the depth of the blade (propeller with slot, for example) and it was the case of the propeller Clarence Holman, conducted in the United States, and included a leading edge flap, as it was for the wing of the Potez 36. Or else as follows: on the same motor, two propellers rotating in opposite directions for the takeoff phase, ascent, slow flight; for rapid flight, Only one propeller operation, the other turning freewheel. And we find here the case of French propeller Salaun ; it consisted of two identical propellers, mounted on the drive shaft, one behind the other; both propellers executed the rotational movement of all propellers but,front propeller had the ability to slide on the shaft, whereby the slot between the two propellers varied automatically. We can act on the profile, with a system that changes the flow around the profile. Breguet around 1930, realized a propeller with hollow blades: drilled holes along the intrados,caused the effects of nozzle on the distribution of flow. Difficult to achieve, as the previous solution. 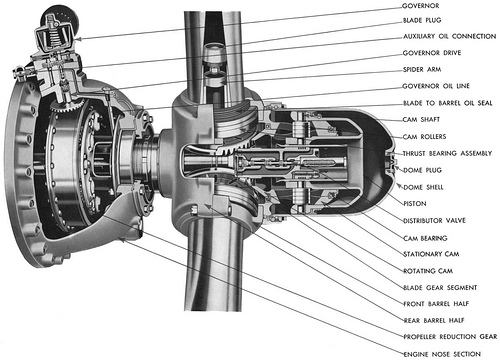 The evolution of the variable pitch propeller: Considering the range of pitch::

With this type of control, the energy required to change the pitch is taken from the engine ; For this a clutch is mounted between the motor housing and the control system of the blades (integral with the driving shaft) ; when the clutch is operated, it ensures the variation of pitch of the propeller via one of the control systems which it just mentioned and reductor. The clutch can be operated either by hand or by using couplers, these being electromagnetic or pneumatic.

Two types of achievement : mobile motor fixed at the shaft end driven by the propeller ; moteur fixe. stationary engine. In both cases, the rotary motion of the electric motor is converted, by a reductor, in a rotational movement of the propeller blade. With electric power, is used a source independent of the engine, which is an advantage and a disadvantage. The control is easy to achieve with these propellers, but this system has a certain fragility, especially in the case of the rotary electric motor, and a large amount of power is required to achieve a fast pitch variation.

As in the case of the mechanical control, this type of propeller does not use any energy easement :it uses the oil in the circuit which supplies the motor.. three variants : with fixed piston and moving cylinder (Rotor),Fixed cylinder and piston - single acting - Mobile (Hamilton) fixed piston and cylinder - double acting - Mobile. In the realizations having a piston which works only on one side, the propeller pitch are two in general, one of the pitch being obtained by the pressure of the oil on the piston, so that it is the centrifugal force which brings the propeller to another pitch. The "flag" position can be easily obtained with the double-acting pistons.

Since the beginning, the manual control of the pitch appeared to be temporary. The pitch should vary automatically, either to continuous manner, or almost instantly. Since the beginning so it was implicitly assumed that the variation of pitch required an automatic regulator.

The change in pitch of the propeller boat 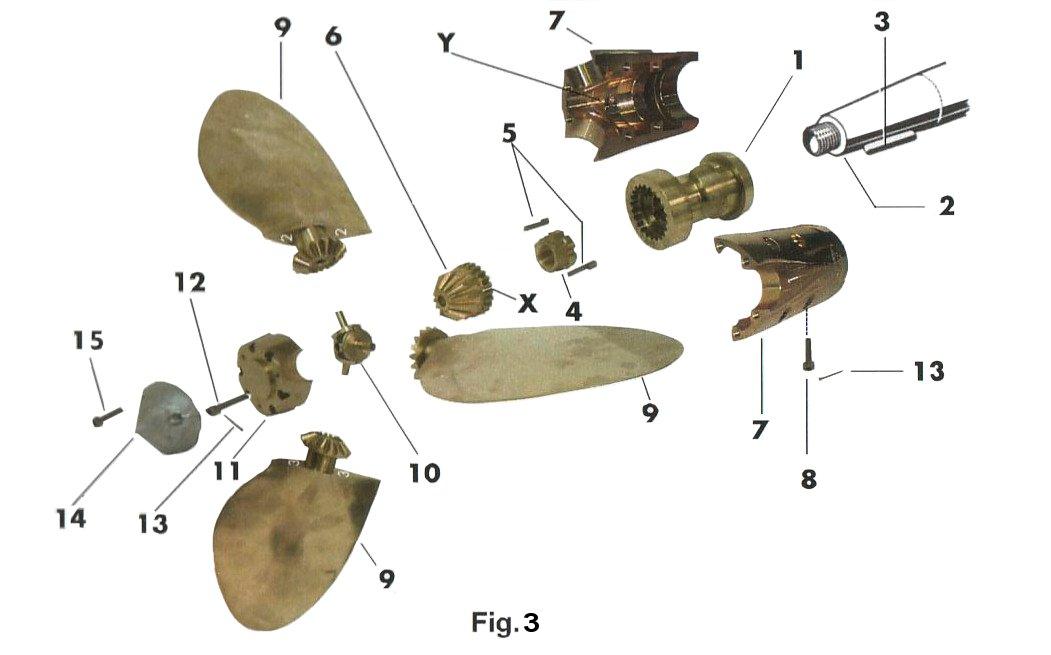 the "self pitching propellers" current are derived from the work of Griffith (1849). Forward, the propeller blades, whose axis allows rotation, come under the influence of a lift and axial misalignment, to put into abutment with their operating pitch. If the propeller shaft stops rotating the blades set in flags position and reduce drag when the boat is under sail. When in reverse the blades come to into abutment pitch. It should be noted that the positions of angles backward and forward are preset. It can not be adjusted during operation .the angle of incidence is optimum only if the preset angle into abutment matches to the operating point of the propeller at this angle 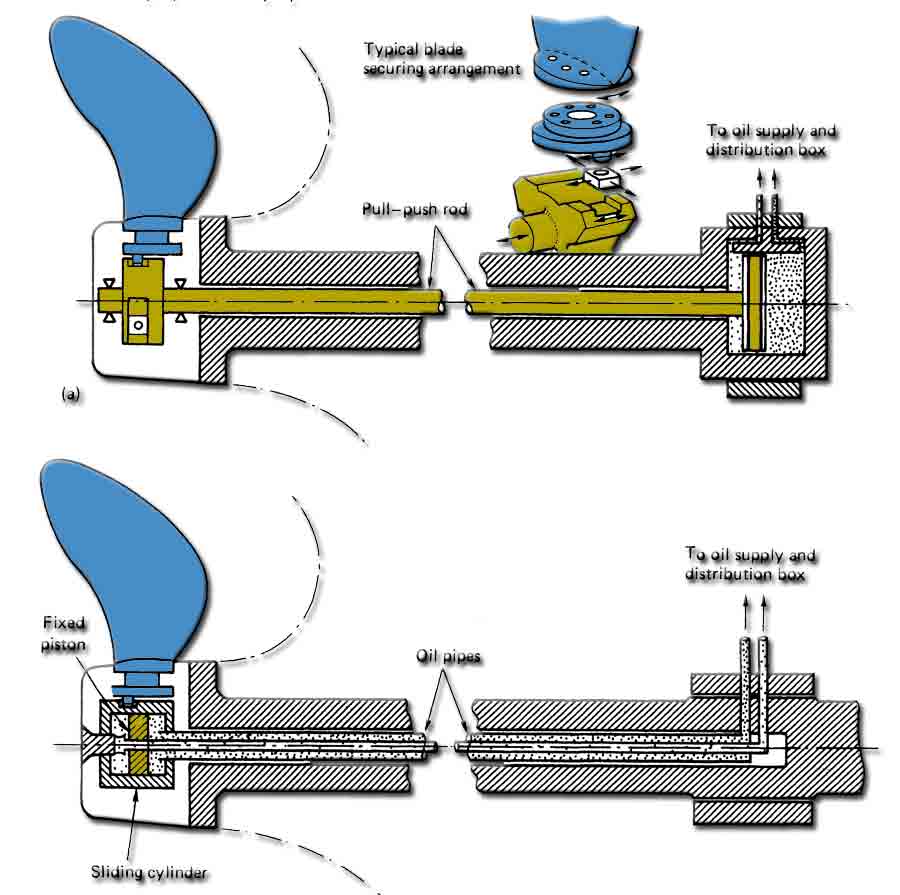 Adjust the angle of incidence such that that the propeller offers the best performance, is one of the first advantages of variable pitch propeller. The ability to operate without changing the rotation speed of the motor or adjust the speed with accuracy in narrow passages or lines of ships follow. A reverse without changing the direction of rotation of the shaft may also be significant. the feathering is significant for ships with some of their propellers, can be arrested without generating too much drag..(multiple propellers) The propulsion efficiency in reverse can be increased compared to a fixed pitch propeller turning in reverse

A simple glance at the evolution of sales of variable pitch propellers gives us an idea of the place that took the system in shipbuilding: 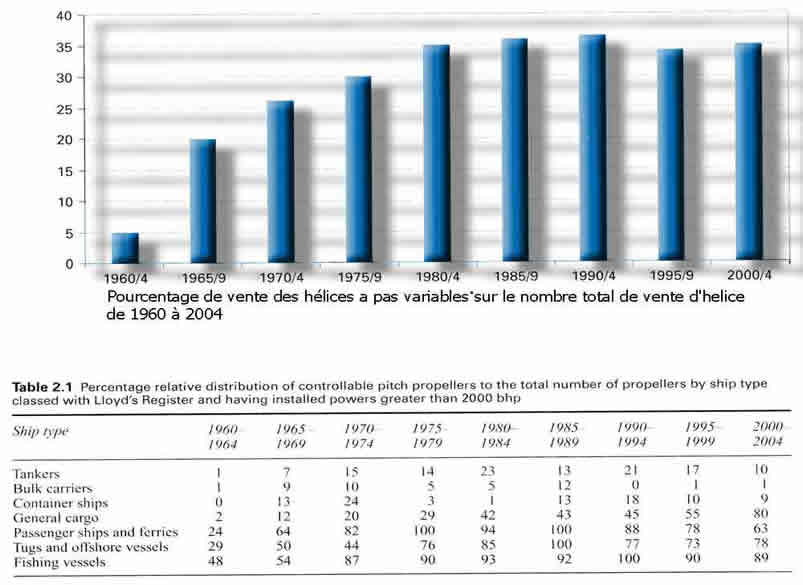 Wind turbines use the pitch variation mainly as a means of regulating their power:

The high wind speeds are certainly very interesting from an energy point of view but they are infrequent. So needless to oversize wind for these high speeds. Because the price of some components increases rapidly with the power they have to transmit. That is why modern wind turbines are designed to achieve their rated power at about 15 m / s and are stopped automatically to 25 m / s. To limit the power increases with the cube of the wind speed, it is necessary to establish a system of regulation.Briefly, we distinguish two kinds: Other advantages of the system with variable pitch:

Regulating the rotational speed is also achieved by means of electric motors, for the great powers. In this case, use is made either of individual motors for each blade, synchronized with each other,either a single electric motor for the whole of the blades. The stepper motors geared down, actuate gears which mesh with the gear wheels fixed to the root of each blade. The control is done through the primary shaft.

Whatever the method used, The device control the pitch permanently. It facilitates starting giving. to the blades, a pitch angle sufficient. Between wind speed startup and rated wind speed , it makes the machine work at its maximum aerodynamic efficiency. Between the nominal wind speed, and maximum wind speed, it limits the power captured by increasing the pitch. When the wind speed reaches the maximum value, it stops the turbine blades by feathering