Understand what is happening on the wing and flying, has took few centuries to humanity...and it will take some time to do it with less energy than birds.Move an anvil on 10 meters with a 10 megaton firecracker is impressive but a little expensive.

The genie is to fly the heavier object possible with the least possible energy. The concept of transport speed is important because take ten days to 10 meters, even an oyster can do it.

The tests in wind tunnels or pools (numerical or experimental) give us performance coefficients (no units) that will be the the basic data for the calculation of the forces on the wings propeller blades and foils:

Observe that the drag forces and lift increases with the square of the speed.

The drag and lift of a propeller in the software HELICIEL

The Wing or Blade elements:

A wing could very well be defined by a single profile of constant width, but to answer the constraints of mechanical resistance and to obtain optimum performance, the actual shapes are generally more complex. To analyze and understand what is happening on a wing or propeller blade , it is convenient to cut it into slices, starting from the base to the tip, the shape of the sections are the profiles.The profiles describe the sectional forms of our blade. A portion flanked by two profiles is un an element of the blade or wing.

the elements and profiles of the blade

The profiles known performance that surround an item, allow us to calculate the drag and lift of the element. This method of blade elements analysis allows the calculation of propellers.This calculation using 2D performance profiles requires some corrections to take account of the length of the blade or wing which is the third dimension: It is important to reiterate that the calculated drag and lift with cd and cl are theoretical values​​, not taking into account some losses.. Ideal wing or a blade which would not have leak, would have an efficiency equal to its 2D performance of profiles. these these drag and lift theoretical, measured in wind tunnels or calculated by numerical methods, are nominated performance 2D (2 dimensions) or "performance wing of infinite span." 2D, because it does not take into account the phenomena of the third dimension: the length of the blade or wing. 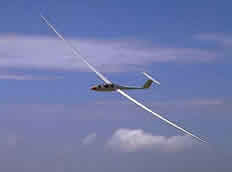 Calculate the performance of a wing considering tip vortices and tip losses requires knowing the impact these vortices on the profiles 2D performance. This can be done by calculating the deviation of the fluid induced by the vortices. Calculating the speeds induced by the vortices, we can correct angles perceived by profiles and infer the performance of the wing of finite span (3D).The calculations of these speeds is achieved by the induced vortex theory that describes the relation between the lift and the vortices. To learn more:Theory wing of finite span based on the method of distribution of vortices.

Example of the influence of the shape and aspect ratio: vortices and wingtip loss of 4 wings of shapes and different aspect ratio, shown schematically in software Heliciel

A device reduces the blade tip leakage by placing a barrier:

You now know the basic principles that will allow you to guide your choices when you choose your wing or blade geometry settings in HELICIEL software :

We now turn to a specific phenomenon hydrofoils and marine propellers: Cavitation

If you wish to learn more: