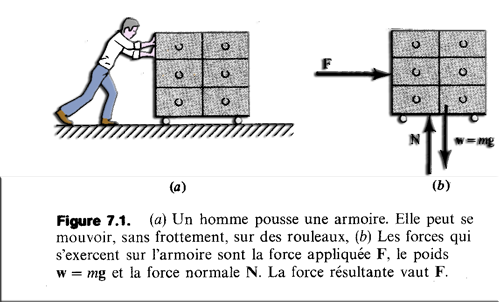 or: The impulse (newtons.secondes) is defined as the product of the average Force by the time interval: The momentum (amount of movement) is defined by the product mv, It follows from this definition that the unit of momentum SI is the kilogram x meter per second (kg. M / s). the impulse is equal to the variation of the quantity of motion,, With: P= m.V et P'= m.V' example Its weight is 0.15 kg. If the duration of the impact is 0.001 s, which is the average force exerted on the ball?

The initial momentum of the ball is zero since the ball is stopped.The final amount of movement is P' = m.V'. From the relation F.Dt= P' - P, we deduce that the average force F exerted on the ball is:

Momentum is a very useful concept to study the interaction between two or more objects. Fig. below schematically a collision between two objects. Friction is assumed to be negligible. Each object is subjected to the force of gravity and a normal force. 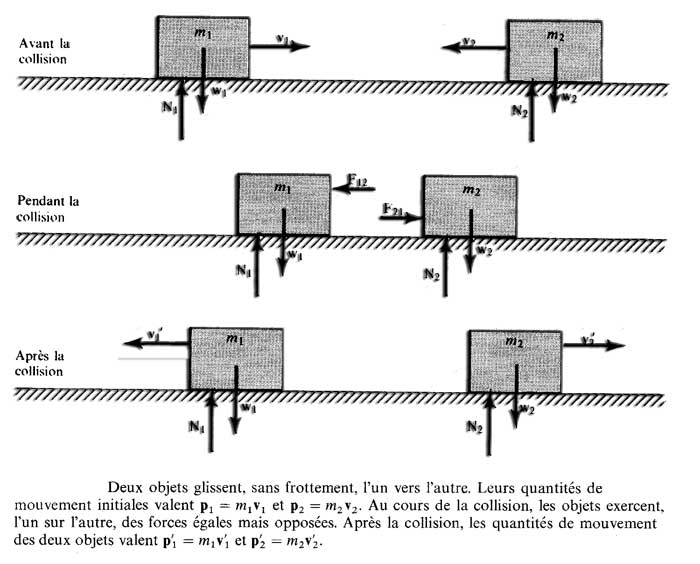 During the collision, as the objects exert forces on each other. These F 12 and F 21 forces are forces of action and reaction. So they have the same magnitude, but opposite directions. If the collision takes for a time interval Dt, the variation of the amount of movement relative to each object can be calculated from the average forces F12 and F 21 . Since F12 + F21 = 0, if we add the two equations, and This equation shows that the amount of movement resulting from the two objects is unchanged before and after the collision. The total momentum of the system is maintained.. This is important. Indeed, we can relate the speeds of objects before and after the collision without knowing anything about the forces acting between them during it. The fact that these forces are equal, but opposite directions is sufficient to establish the relation.

The cannon fires a bullet to the right. The canon is rigidly fixed to the floor of a railway wagon

We therefore The recoil velocity of the cannon and of the wagon is very low because their mass is important.