Blade element momentum theory is a theory that combines both blade element theory and Froude momentum theory. The Theory of Froude on turbines capture energy "momentum theory" , allowed us to do relation between lnduite axial velocity and thrust force. This theory, assumes that the flow undergoes no rotation, and does not give us indication shape to give our blade..

In reality, the law of conservation of angular momentum requires that the air must have a rotary motion, so that the rotor can extract an outputTorque. In this case, the direction of rotation of flow of the air is opposite to the rotor..

Blade element momentum theory, builds on the results of the theory of froude to estimate the elementary axial force (relative to an element), and introduced performance profiles distributed by elements along the blade.The introduction of the rotational movement of air allows the model to better approximate the reality and get the induced velocities tangential and axial component brought by the theory froude using the variation of momentum induced velocity, thus more reliable results. The introduction of performance Cx and Cz profiles allows to determine the geometry and build a real blade.

We will also see two corrections, one correcting the fact that the number of blade is considered to be infinite in the method of froude (loss factor blade tip Prandtl) and other correcting the results for the strong values ​​of axial induction, where the Froude theory is no longer valid (Glauert correction for factors greater than 0.4 axial induction) In developing this model, the following assumptions are considered The method of Froude uses variations of momentum in a global volume control, here we use the ring elements as volume control, to know the change in amount of elemental movement, for each ring of the rotor. The sum of the performance of these rings give us the overall performance of the propeller.. 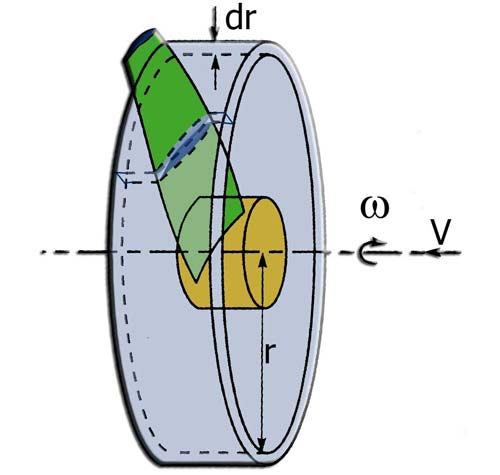 The change of momentum for a "dr" thick element positioned at radius "r" so give us the axial thrust "T" on the element :

The change of momentum for a "dr" thick element positioned at radius "r" gives the couple "MR" on the element, introducing the induced tangential velocity:

introducing in equations 6.1 and 6.2 of the axial and tangential induction factors (a , a ') described above we obtain:

recall that (figure2) we find that:

Remind also that the lift dL, is perpendicular to theelement speed Ve and drag dD. If the coefficients of lift and drag are known drag and lift are defined by As we are interested in the force generating rotation, thus parallel to the plane of rotation, and the thrust force, therefore perpendicular to the plane of rotation, the drag and lift, will be projected into these two directions. This can be normalized with respect 0,5.rho. Ve². c : thus we can see in Figure 2 that and The solidity S is defined as the part of the annular surface of radius r of the control volume which is covered by the blades of the propeller. Solidity S is calculated according: with B, the number of the blade, and c (r) the local chord, and r the radial position of the control volume.

As Pn and Pt are forces per unit length, the thrust T andtorque MR on the volume control of thickness dr is:

If the two equations (6.21) and (6.4) are equalized, and the definition of solidity is applied,

we get the expression of the axial induction factor a:

and if we equate equations (6.22) and (6.25), we obtain the equation of the tangential induction factor a':

Correction of the number of blade

The method froude considered an infinity blade on the rotor disk, the correction factor blade tip losses, derived by Prandtl, is used to correct the performances according to the number of blade.

The F factor is used to correct the equations (6.4) and (6.5), so it becomes respectively:

With F loss factor at the blade tip, Prandtl, calculated as:

B is the number of blades, the radius R at the blade tip, the local radius r of the element and (alphai Phi +) angle fluid seen by the element. (see Figure 2)

The loss factor at the blade tip F is used to correct the assumption of an infinite number of blades. element's thrust is given by:

The thrust coefficient Ct is by definition:

So we can now introduce our corrections described by the equation (6.38) :

The relations established in this page allow us to create an algorithm converging iterative. It is thus possible to calculate separately the induced velocities, incorporating the corrections Prandtl and Glauert for each blade element. This method uses the performance data profiles. It allows to calculate the thrust and torque on each element.. By adding together these results, the performance of each blade will be found, and the sum of each blade, we will give the overall performance of our propeller.. Algorithm of calculation: