The loss of efficiency of the propeller or wing is important when the blade or wing is short. The solution to prevent leakage of pressure at the blade tip, is having a blade whose elliptical shape and length, focusing the lift area far away as possible from the tip of the wing or blade.

the spitfire, with its elliptical wings, focuses lift as far as possible from the tip of the wing to prevent leakage.

Another solution, which can be combined with the first, is placing a small barrier to block the passage of fluid at the blade tip. it is the winglets on the wings.

It is possible to equip the propellers, with winglets, this exists on some helicopters.

Another way to avoid blade tip losses on propellers: the ducted propeller.

it is possible to simulate a propeller shroud with héliciel, If you select the option "ducted propeller" losses blade tip will be considered void.

This is not completely realistic because the friction between the blade tip and the fluid stationary in the boundary layer of the shroud, will be added and affect the torque so the performance will be affected. In practice we keep a gap greater than the boundary layer of the shroud, implying that leaks can persist....So HELICIEL gives you in this case, performance slightly overvalued. But it is still usefull to asses the benefit of a shroud around the propeller

Some designers of wind turbine using a shroud to increase efficiency, some even claim to exceed the Betz limit with this system. The fact that the shroud of the wind turbine minimizes losses at the blade tip is indisputable. But at the level of Betz limit, the fact of taking the diameter of the propeller as the basis for calculating the coefficient of power generates falsified results: The propeller efficiency (CP) is: Cp=shaft_power_w / (0.5 X density_m3_kg X fluid_velocity_ms³ X disc_area_m2).

If someone comes to tell you that the performance of its wind power system is superior to 0.59.., Check that the disc surface taken into account in the calculation corresponds to the area actually received, and not to the area swept by the propeller, located at the end of reduction of the inlet cone formed by the shroud! Another trick is to draw the plug formed behind the propeller through shaped rings, which use external energy to the fluid stream to create a depression on the back of the propeller. The area actually received, is there also modified! The best propellers do not exceed 70_80% of the Betz limit. These systems ducted have their advantage because they reduce losses at the blade tip, and increase the efficiency of the propeller, but never above the Betz limit!The increase in performance provided by these shrouds must be weighed against the cost of additional manufacturing, and there often with the added material, we'd best interest to increase the diameter of the propeller and the overall system power!

When the diameter of the propeller is ​​limited by the installation environment, and the environment in which the vessel operates, does not allow to increase the length of the blade to minimize tip losses, Some boat manufacturers use ducted propellers.When a propeller must provide a strong thrust for a small diameter,the losses at the blade tip may become very important. This is the case of tugs propellers: In this case the shroud can provide up to 50% higher yield. Because the loss tip blades are no longer feared the chord blade tip can be great, because the blade keeps its effectiveness through the tip. The shroud generates a drag proportional to the square of the speed of the ship. Above a certain speed of evolution, gain efficiency losses in the end of the blades, will be destroyed by the drag generated by the shroud. The shrouded propeller is therefore suitable for low speed vehicle. 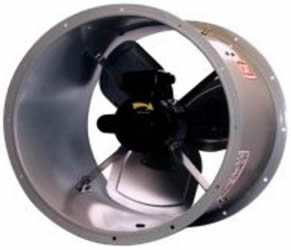