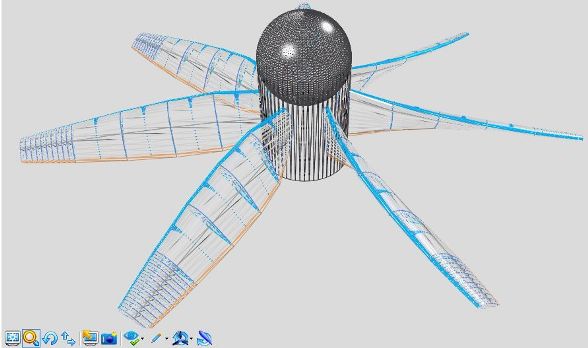 Varying the rotational speed or velocity of the fluid relative to the operating point of construction, degrades the performance of the propeller or turbine.. 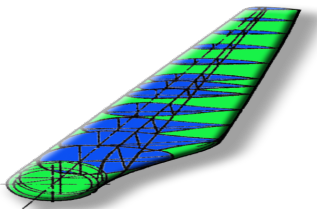 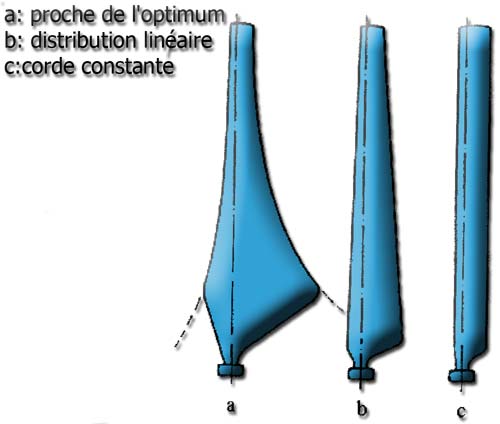 A compromise between the overhead of matter and the yield earned must be evaluated because the matter used in the blade root is very important. A high aspect ratio of the blades, usually offers better performance, but for boat propeller blade length is reduced by the maximum depth of the propeller shaft, tip velocity of blades quickly generates cavitation when the blade approximates the surface, and limited Draught... These constraints impose very different forms of blades from the shapes of aircraft or wind turbines blade.

the matter and the structure of the blade, are taken into account in the calculation of resistance of the propeller or the wing by Heliciel software.A quick tour of the horizon on the technical materials and construction of the blades will be useful.

For wooden propellers - those of early aviation and those currently still of light aviation- the best material is the walnut. But you can also use mahogany, rosewood, ebony, beech, elm, ash, boxwood, maple. When the wood was replaced by metal, the duralumin was chosen for the vast majority of cases. But duralumin could not be retained after years of working the metal, to develop the forging of the metal. Vers 1920, on savait bien étirer et laminer le duralumin, Around 1920, it was well known stretch and roll the duralumin, but we do not know the forging in volumes large enough to be a propeller blade.. This duralumin under the action of the pestle, was behaving in a way as would a rubber block, instead of gradually taking shape just like a block of steel for example. Currently, duralumin blades are obtained by forging and stamping, with mastered technical.

Of course, we tried to replace the duralumin with a lighter metal : Magnesium alloy. The lightness of the blade is an extremely significant element because the centrifugal forces - tens of tons - are proportional to the density of the material used.The reduction of weight of the blade saves us on all fronts: reducing of: sections, weight, size of the parts of the hub.

However forging blades magnesium requires a more powerful tool, as forging blades duralumin. On the other hand, a solution has been provided by the development of matrixing for the manufacture of the blades. Another material used for the propeller blades: the steel. Steel is used for large propellers, which is hollow,then it is made ​​of two half shells pressed, sealed over their periphery and having internal stiffeners;the durability of the welds naturally asked a long development,sheets "rolling" on each other for the first achievements.

Carbon is increasingly used and seems to impose. The performance of lightness and strength make it material of the future. A perfect mastery of the molding is however need, to a good balance and absence of defects.

the propeller blades of boats are generally molded: a mold bed is constructed, and the smoothed out to pitch propeller using a rotating plate around a sliding and guided by a rail axis giving it propeller pitch: 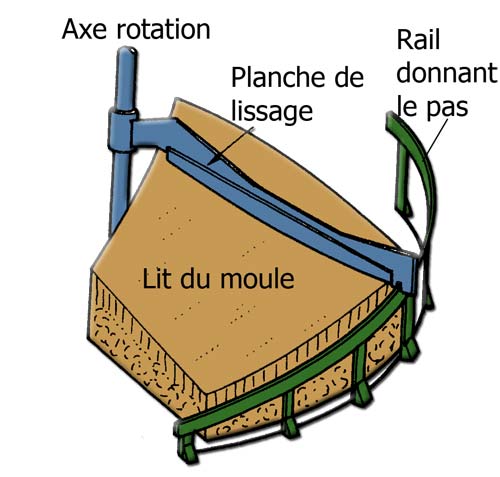 The bed of the mold is hollowed and formed, with boards, cuts at shape of profiles of the blade. 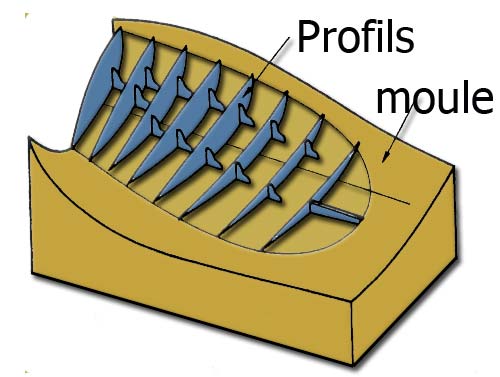 The top of the mold is made in the same way and the blade is cast.

A new generation of propeller is created with carbon entering and winning in the market for boat propeller:: 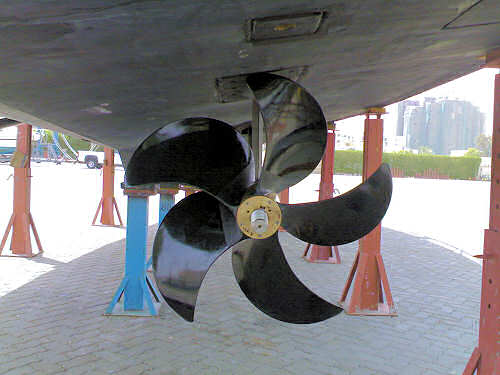 The materials used today are mainly fiberglass or carbon saturated polyester resin and epoxy. The wood is used mainly for small-bladed wind turbines, both blade will be cut into the same piece of wood. Connect the wooden blades to a hub can be tricky due to mechanical stress and the centrifugal force.

A construction technique used for small wind turbines is sometimes pultruded fiberglass. The pultruded blades pass through a shape that gives them their profile, but the distribution of chord is necessarily constant. 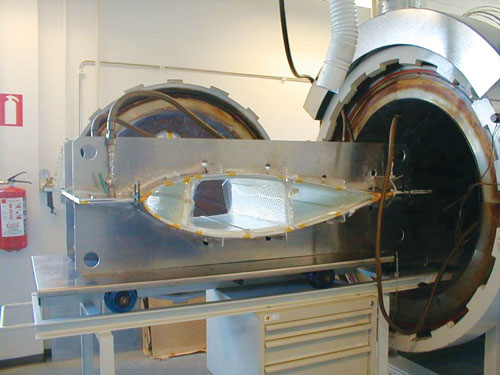 another method to construct fiber and resin, is to wrap a wire coating resin around the blade by turning on a lathe:: 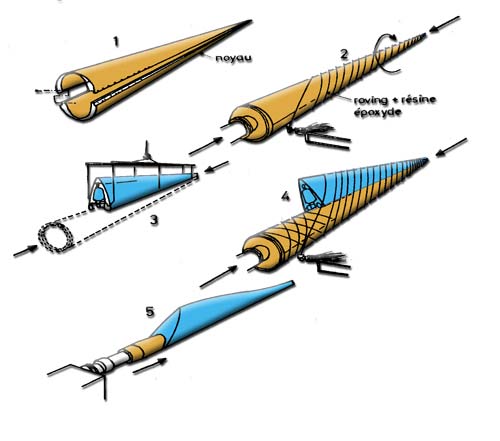 again the carbon appeared but it is rather reserved for small wind turbines because of the price of the material.