Foreword introducing function Heliciel software: The software tool has entered the mechanical studies offices. and the engineer or designer seems to have grown in power design, but beware, the "mouse" may force the designer to adopt inappropriate methods, so take care not to "throw the baby out with the bathwater" take the example of using 3D CAD software modules calculations simulating fluid flows by the finite element method. These tools are very powerful and effective open multiple posibilities of controls design. But this type of finite element simulation can only be made ​​that after designing a 3D prototype, it provides information that in retrospect, this amounts to a form of empiricism if one is satisfied with this approach:: This type of method is suitable when the shape of the object and the fluid velocity (or object) are predetermined. because the number of trials is relatively reduced, but to design a propeller this method becomes unusable because the induced velocities entries are unknown (the propeller draws air upstream or brakes if a turbine) that the user must be included when calculating, and the optimum twist being a resultant of these speeds, the shape of the model is necessarily an unknown too.

. So designing a propeller in 3D and test with finite element produces very nice designs but is a form of empiricism costly in time and does not necessarily give good results. Prior to model the object, the method of calculating propeller must determine the speed induced by the propeller at the same time as its form, this method exists, its history is summarized on this page, but it presents the mathematical difficulties (convergence of nonlinear equations Resolved by Newton method) as the offices of mechanical studies have left to theorists of fluid mechanics. Heliciel The software has been designed to integrate this method in modern design offices mechanical studies. This does not not exclude the use of 3D CAD model because the optimum blade created using Heliciel in IGS Format may be injected into the CAD! 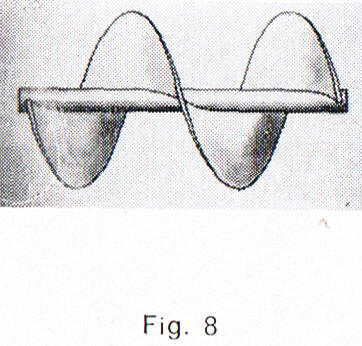 The screw propeller, to the origins, was considered a screw, progressing in a fluid environment exactly as does the screw in wood or metal. For the latter, the feed per revolution is not exactly equal to the screw. It was believed that the propeller efficiency would be 100/100 if so for her, since the advance along the axis would be equal for each round, to the pitch of the screw propeller. Neglecting friction, the work required to turn the screw is exactly the work required to lift a weight. The same is true for the propeller (assuming it is equated with screws) work required to turn the propeller (work done by the engine) corresponds exactly to the work necessary to "pull" the plane, still neglecting friction.

Here is the foreword of "General Theory of the screw propeller" published by S.Drzewiecki
in 1920 which outlines the theory of blade elements : 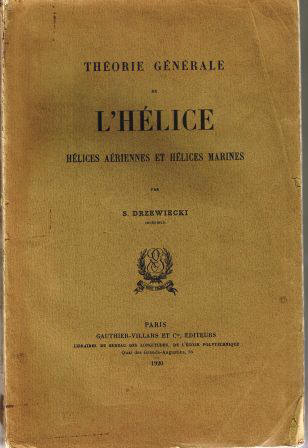 This same theory has also been extended to air reels, and has provided some new phenomena that experience has confirmed. I am pleased to be able to finalize this work I had established the first foundations long ago already, I developed since on many occasions and that I was able to complete today 'Today thanks to the valuable experimental information were kindly provided to me by the aerodynamic laboratory where Mr. Eiffel Auteuil, kindly do some specific tests to clarify the question. I asked Mr. Eiffel find here the expression of my gratitude. However, despite the many arguments set out above, in favor of this theory, it could still remain some doubt about the legitimacy of the fundamental assumptions that served as his base, since no direct experience and critical n 'had yet established the merits. This is why a number of scholars, not least, while accepting these ideas to the detail of the question, yet persisted to base the theory of propeller design of the fluid mass discharged
the propeller, assuming that the mass discharged to the second was that of a cylinder having a base circle swept by the propeller pitch and the speed of discharge. However, these two concepts are not only incompatible, but they are mutually exclusive. Indeed, if we assume with me that the wing of the helix is ​​like a board exposed at a certain incidence in a fluid stream and produces the deviation of a certain layer limited fluid, whose thickness depends on the width of the wing, its style, its impact, etc.., it is obvious that the flow thus generated should move with the wing itself, while remaining parallel to himself, and thus constitute what might be called a turning speed of the wing flows and should be as many of these streams there are wings, and the disturbance between the two wings should be less than or zero. If, on the contrary. the opposite is accepted theory, the flow should be continuous throughout the section of the cylinder, and the discharge speed should be constant at the same distance from the axis of rotation. The speed measurements far upstream and downstream of the propeller, seemed to confirm this hypothesis, but if the issue more closely we look, we can understand the reason for this apparent contradiction between the results these tests and the basic assumption of my theory. It is that anemometers and liquid pressure gauges used to measure the pressure of the Pitot tube instruments are used exclusively for measuring fluid velocities, are endowed with inertia and, for this reason, they are not able to follow the rapid changes in fluid velocities that occur in passing of each wing, and do not indicate a steady state, as it means, while the actual motion is a series of pulses which follow with great rapidity. To solve this critical issue, we had to rely on direct experience to rigorously determine the flow pattern of the fluid during operation of the propeller, and that means measuring instruments in which the influence of inertia would have been excluded. It was possible for me to do this experiment with a device that I built for this purpose and that I have experienced through the kindness of the Eiffel Laboratory. This experience has fully succeeded and we read the details in the course of this work, she has shown irrefutably that the flow caused by the passage of a propeller blade moved with the wing, and did provide my theory, and the fluid between the two wings suffered little disruption. There was no doubt therefore possible, the accuracy of the hypothesis that is the basis for my theory was confirmed in a direct way and
compelling, while the assumption of cylindrical flow was reduced to zero in the same shot. The success of this pivotal trial has encouraged me to present to the public this study screw propellers


After the theorie of the blade element is, in 1912, the vortex theory of screw propeller of Joukowski. In this theory, each propeller blade is considered to be a vortex attached to the blade whose circulation is variable along the blade. This variation produces a sheet of free vortices from each blade element. This theory is a combination of the above theories, momentum and blade element. It was perfected by the work of German Betz and Helmbold, Karman, Bienen, the British Wood and Glauert, the Italian Pistolesi Lanchester, Prandtl, Japanese Moriya and Kawada 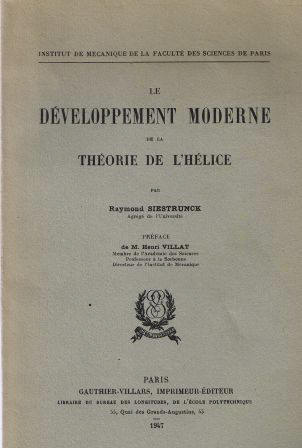 Here is the introduction of "the MODERN DEVELOPMENT THEORY OF screw PROPELLER" Raymond Siestrunck published in 1947 : The theory of the propeller is constantly renewed and developed since the onset of theoretical essays Rankine (1865), as knowledge about the operation of the propeller aerodynamics and bearing surfaces in general were extensive, and the first proposed methods deal with the problem in a similar way to that of turbines: the helix is ​​formed by a series of elements corresponding to the different sections of the blade and that can be considered without any interaction between them, the fluid reaches this blade member with a speed equal to the resultant of the speed of advancement and rotation of the element, whose action is a deflection of the fluid flow being evaluated by kinematic considerations deduced 0n by applying theorems of momentum and angular momentum, the basic thrust and torque provided by the member, and the total forces are obtained by integration along
the blade. Other methods penetrate a little further into the aerodynamic mechanism, applying to each element of the theoretical or experimental laws of fluid resistance, determined, of course, elements of uniform translation, integration then gives the total expressions traction and torque, here is the place names
of Redtenbacher (1875) and W. Froude (1878), a complete description can be found in the General Theory of the helix, Gauthier-Villars, 1920. of Drzewiecki. On a quite different basis then places the known theory H.-E. Froude (1889), which directly connects the pressure and engine power of the propeller wake created by the latter, the analysis of this trail is incomplete since admitted that the propeller communicates the fluid flowing through a certain wind speed uniformly distributed over the disk it scans, or, equivalently, that the effect of the propeller is equivalent to a discontinuity in pressure on either side of this disque.Il not until 1912 and the first memories Zhukovsky for the connection is made between previous theories and the importance of vortex emission energy exchange is already proven, and knowledge of the path of the propeller has greatly increased since the experiences Flamm (1909), which is what allows Joukowski the foundations of the current theory, in which still applies to each blade element, the experimental results of the bearing surfaces, but due to the interaction of other elements, including the vortex emission "induced" on any additional blade speeds. The connection between these induced velocities and operation of an item is made using the "traffic" that characterizes the lift of each item, the theorem that now bears the name of the Russian scientist. Joukowski work related only propellers constant traffic distribution along the blade, but not least the work ahead of the Göttingen school on airfoils and propellers (Prandtl and Betz), and since then, numerous studies have been published on the problem of the propeller, which, at the death of Joukowski, I-92 I was completely set. The further development of the vortex theory of the propeller on a similar Prandtl model for the airfoil, has faced much larger than it was in difficulties, and its development was, therefore, less brilliant and less complete. This is for the most part to the fact that the assessment of additional gear in the wake produced by the turbulent exhaust can be made in simple terms in the case of the propeller, and that, except in a few special cases, the difficulties mathematical order paralyze the development of the theory. It has, however, developed modes approached different problems regarding propellers solution, or that focuses on determining the shape characteristics of the propellants for performance imposed or that addresses the inverse problem , determining the performance of a particular family and that deduced by continuously variable pitch propeller, the first point of view resulted mainly work known Goldstein (I929 ~, which provides, in the field validity of the theory, a rigorous solution of the problem of adaptation, the second point of view leads to calculations that are a degree of complication necessarily at least one of the methods used for the wings (Glauert, Lotz) but we see that they can be made quite manageable to allow interesting comparisons between theory and wind tunnel measurements. We will briefly review the assumptions that are the basis of the current theory of the helix, and report the main difficulties they rise or remain after ....

Among these methods of calculations screw propellers, Heliciel software uses the most successful (the vortex theory of the screw propeller) with corrections of Glauert and Goldstein