airfoils blade profile
Reminder on the profile geometry: The profile shape of the wings or blades determine their aerodynamic or hydrodynamic performance but also their mechanical strength. The compromise between performance and mechanical strength is at the heart of the problem of the definition and optimization of the geometry of the wing or blade. In the aerodynamic or hydrodynamic point of view, the higher the profile is fine unless it generates a resistance to the advancement. A slight bend for lift and our sheet s' flies away effortlessly ... 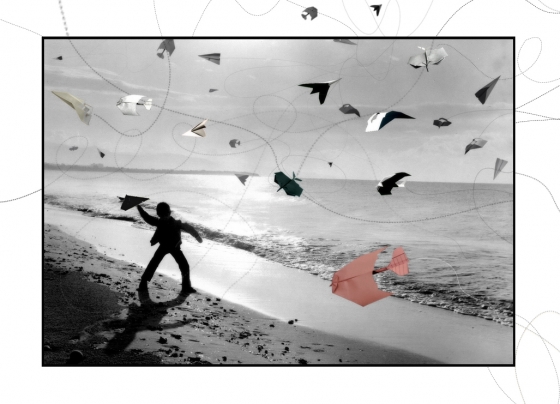 From the point of view of mechanical strength to the best performing weight / resistance is the tube.

Make it fly a tube is fairly complicated (although this is possible by rotating it but we'll talk about later), and to collect the necessary thrust to propel a boat with a sheet of paper is quite complicated too. So .. between the tube and the sheet we have the airfoil. One defines an airfoil as the geometric shape that is obtained by the vertical section of an airplane wing. The shape of the profile is an essential feature of a wing and greatly affects the aerodynamic characteristics and performance of an aircraft..

According to the figure above, we define the following geometric quantities of an airfoil

Different types of airfoils are cataloged in the world. Note, for example, Joukowski, Eppler, Wortmann, NACA, RAE, Göttingen, NLR, NASA / LRC and SANDIA profiles. Of these, profiles NACA type are well known, and in some commonly used as practice for the validation of numerical methods.

Heliciel provides free database of profiles with their polar of about 1,000 profiles of all kinds. To use it simply download on the interactive data base page héliciel

The predecessor of NASA was the NACA (National Advisory Committee for Aeronautics). This organization has studied different families of profiles corresponding to various applications. Among the latter, we must distinguish the family of profiles in four digits, the five numbers and laminar NLF profiles with the designation in the documentation. For example, in the case of the NACA 2415 profile The interactive data base héliciel has a profile editor naca 4 digits that allows you to generate airfoils and transform at will for more information: interactive data base héliciel:

In Heliciel, performance of calculated or measured profiles are stored as database containing the CL (lift coefficient), Cd (drag coefficient), Cm (moment coefficient) relative to each angle of incidence, and each reynolds number, in which the profile was evaluated and normalized coordinates defining the geometrically ...

Optimize the shape of the profiles

A system with a propeller or wing can have a more or less efficient. Whether in terms of finance or quality workmanship, materials and efforts for the realization of a project need to be offset by the quality of the result. The performance of our system is an implacable judge of our work! The optimum performance will be obtained only if we properly design our profiles propeller blade or wing. The main qualities for which a profile is selected is its lift / drag ratio and strength provided by its thickness. These two qualities are antagonistic they involve a compromise between strength and performance of our wing or propeller blade. HELICIEL automatically optimizes profiles by selecting their according to lift / drag ratio and maximum thickness distribution. But knowledge of the geometric parameters determining the lift / drag ratio profiles can be useful if you want to manually select your blade profiles or wing.

Here is an illustration of the dependence of the drag and the relative thickness of Marchag. Note that the pressure drag can become a minority on the low thickness, which implies that to optimize our wing at low thicknesses we must pay attention to the state of the surface which is heavily involved in the skin friction drag.: 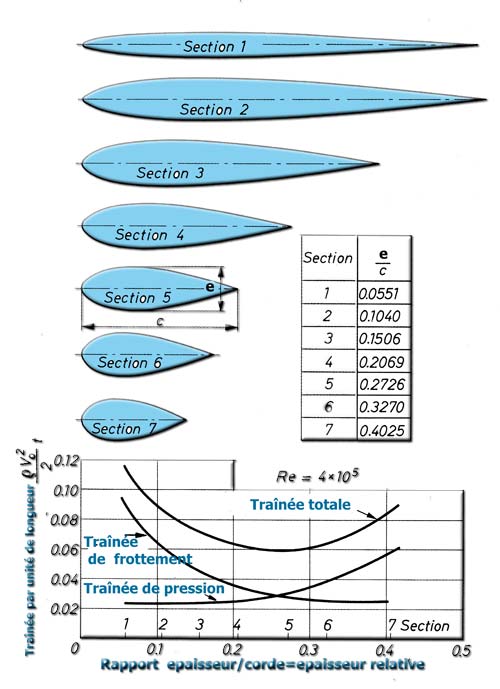 So we see that the Cx is strongly influenced by the relative thickness of our profile. Now interest ourselves in the second parameter of lift / drag ratio.:

The camber of our profile is a key player in the lift. We would be tempted to say that the camber brings the lift but a major phenomenon disturbs this relationship camber lift: The stall ... The lift force is the variation of momentum of our fluid. The lift is the result of our ability to change direction to the fluid. The more we deviate the fluid down, the lift will be more important. Like a car in a curve, the greater the mass of fluid is faster, its inertia is important, and the less it will accept to change direction. The camber of our profile must respect this will of fluid to go straight, and ask only a change of direction that it can perform. If the curve is too abrupt, the fluid separates from the curve, and the effect of lift s' collapses! If the fluid is slow it will accept a sharp turn, so sudden camber. If the fluid is fast, the camber will be low to avoid stall we will remember:

This graph of the evolution of the lift coefficient as a function of camber plates curved shows the increase in lift with camber: 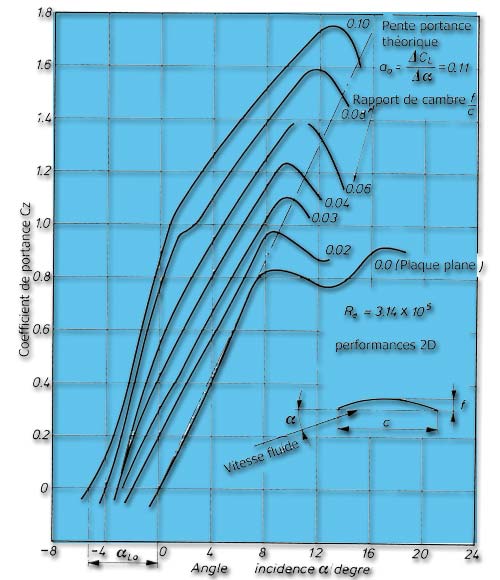 Here is a graph showing the number of lift coefficients measured on three profiles (625 göttingen thick profile göttingen 417 sheet curve and flat plate) of different camber at different rates. Speed ​​profile is given by the Reynolds number. 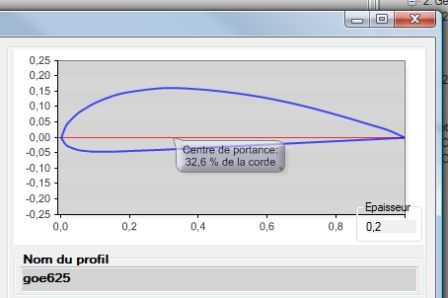 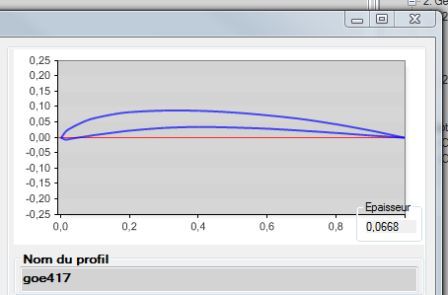 We have seen the impact of the camber profiles on the lift but it curves above show us that the curvature is not sufficient to predict the lift because the speed and thickness play a role difficult simply determine.