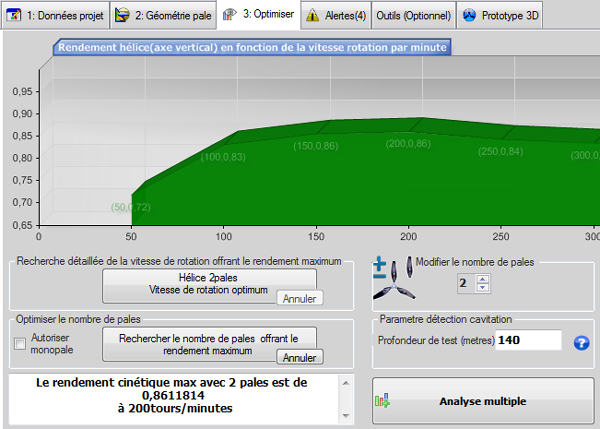 But for a more complete analysis should be used "multiple analysis" which offers many views of performance and test options. For example when the propeller is coupled to an electric motor or a generator,the actual rotational speed of the propeller will be the one which balances the engine torque and the load torque.To determine how fast the spin system, it is easier to make a superposition of torque curves, according to the rotational speed with multiple analysis .

Brief summary of the situation:

The apparent wind received by blade elements is composed of the rotational speed and the speed of the fluid (we do not speak here of induced velocity, but of course it must be taken into account) .The efficiency of a propeller is the performance of its elements that can be compared to rotary wing portions. The best performance is achieved if the elements lift / drag ratio , is the highest possible. The best lift / drag ratio is obtained at a specific angle of incidences, which determines the twisting of our blade. 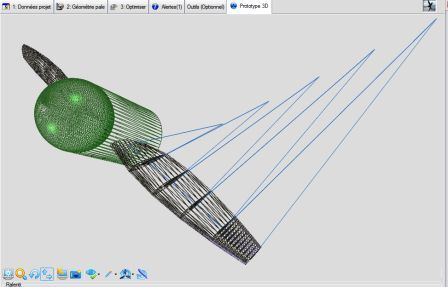 Apparent wind vectors for each element in HELICIEL

Our blade is twisted for that, the angle between the chord profiles and the direction of the actual speed, corresponds to the incidence providing the best lift / drag ratio of the profile. Lift profiles represent the effective force that we use.

The lift is perpendicular to the apparent wind,but the force that interests us is the thrust (for propulsion propeller) or the torque (as a wind turbine). If the direction of the lift force is aligned with the force we are interested, we can assume that our performance will be optimum ... By varying the speed of rotation we change the direction of the apparent wind so the lift. We can therefore assume that there is a rotational speed directing optimally lift forces.. 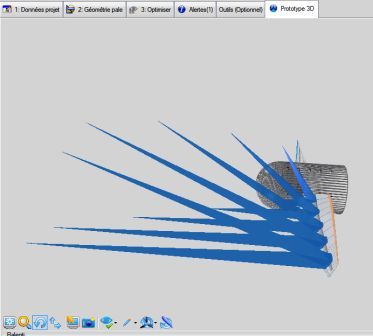 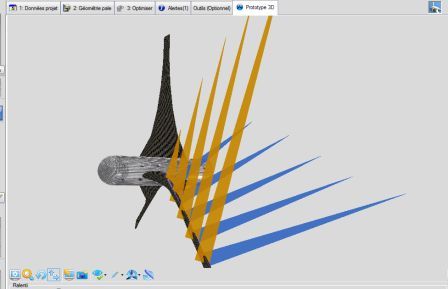 The power delivered to the shaft is : Power = torque x speed. By torque reaction (reaction principle of Newton), the fluid is rotated downstream of the propeller (Induction tangential downstream in héliciel). We can therefore say, that for the same power, high rotational speed is associated with a low torque. This torque is directly related to the rotation of the fluid, we can say that with equal power shaft, the propeller will turn faster produce less rotation of the fluid. Power(w)= torque(n.m) X speed rotation(rad/sec).

A propeller equipped with airfoil blades for high speeds, with a low drag would be optimum. But the speed of rotation is limited by other adverse effect (see above) as the masking effect, which leads us to a monopale theoretical optimum propeller. I say "theoretical" because the balancing rotation must be managed on a mechanical level ... 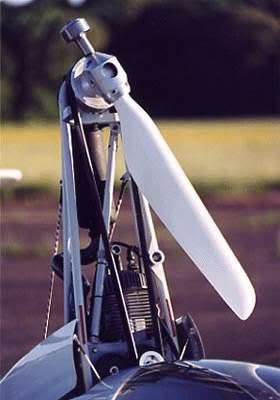 The "best" propeller does not exist and therefore remains a matter of compromise . Each application must invent its propeller achieving the best compromise. 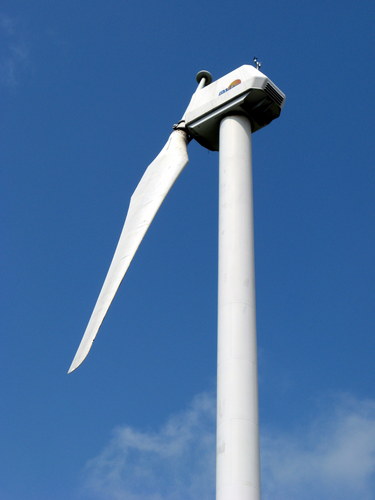 We could say that the faster you turn , the better the performance of the propellers are, but Up to what limit? 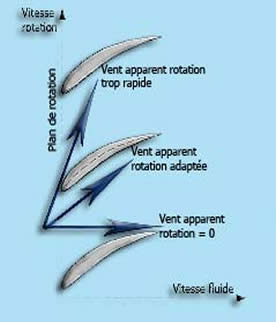 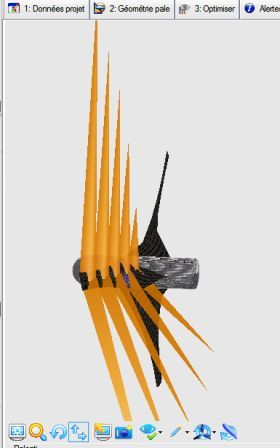 torque and drag on a small wind turbine

We had assumed that the speed of our propeller we were not imposed, but the factors limiting performance are quickly reached.

One of the key factors limiting the speed of rotation being the interaction between the blades, optimize the speed of our propeller involve a search of the optimum number of blade.

A further constraint imposed the rotational speed. This is the machine connected to the shaft.. An alternator, a pump, or an air ventilation motor, has characteristics that the propeller must meet. Thus, the speed and torque can be imposed by the machine. If the difference between the optimum rotation speed of the propeller and the optimum rotation speed of the machine is too large, a speed reducer must be installed. But this will decrease performance, increase the cost, weight, and system maintenance. To adjust the speed and torque of a propeller machine, we can play on the geometric parameters of the blades, but the number of blade can help us change the Optimum speed fairly simple.

The few indications above are tracks, but there is no magic formula to optimize speed and a compromise is always to do.This little article the number of blades of the propeller may also provide some track. Optimization procedure of the speed of rotation based on performance in héliciel: 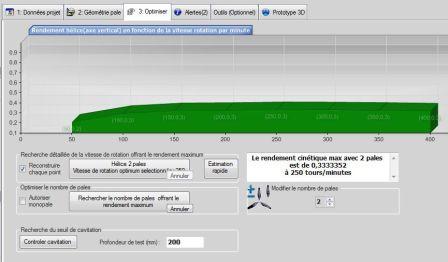 At each change of blade geometry, if the user clicks rebuild HELICIEL rebuilt the optimum twist, for the propeller blades, and updates performance to the operating point imposed. The selected speed determines the twist. But for the reasons we mentioned above, this speed might not be optimum. As we have seen, the parameters optimization of the speed of rotation are numerous and interact in such a way that it is very complex to establish a law of optimization, valid for all propellers. 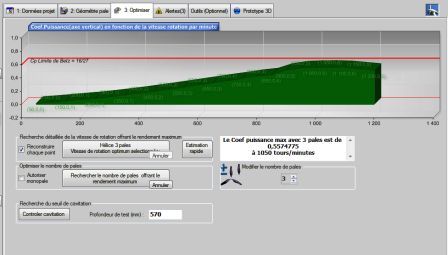 for a more complete analysis should be used "multiple analysis" which offers many views of performance and test options. For example when the propeller is coupled to an electric motor or a generator,the actual rotational speed of the propeller will be the one which balances the engine torque and the load torque.To determine how fast the spin system, it is easier to make a superposition of torque curves, according to the rotational speed with multiple analysis .