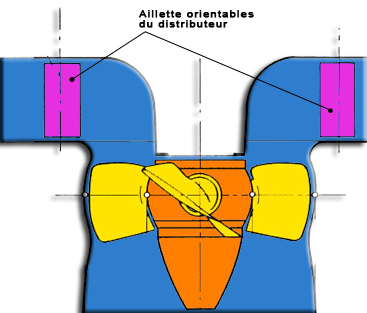 Let's detail the operation of the propeller and guide vanes:

This is the role of guide vanes, which uses the pressure generated by the height to force the fluid through its vanes oriented to generate a vortex. The height energy (head load) is transformed into tangential velocity. 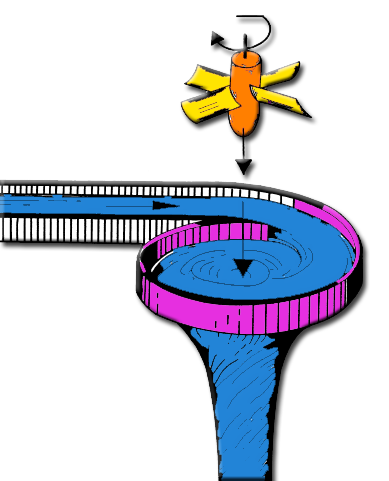 It is important to differentiate the two components in the fluid velocity through the turbine: the axial velocity and tangential velocity:: 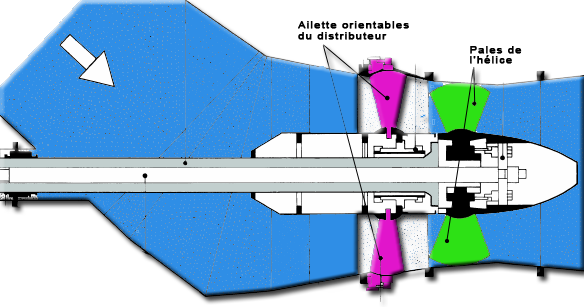 The design method of the propeller turbine capture of energy, that we will propose in the rest of this article, will give the tangential velocity parameters to create with the guide vanes, according to the turbine optimized for a given flow rate. The load or pressure difference caused by the crossing of the turbine, giving the height of drop required to operate our turbine. The axial and tangential velocities at the turbine outlet, can be used respectively for sizing the draft tube and pipe sections and verify that the kinetic energy of the tangential speed, has been completely collected.

To facilitate this turbine design, we use the software HELICIEL, which has the advantage of automatically creating the optimum blade twist for a given operating point.

The database of profiles in software HELICIEL enable the design a 3D model of blade to igs format according to the selected profiles. low pressures calculated on the blades will be compared by the software, to cavitation pressure, depending on the depth of the propeller shaft. The goal is to make a complete study of the system in full autonomy, without tackling complex calculations of fluid mechanics. HELICIEL produce 3D shapes of propeller blades that you can assemble in the mechanical assembly. Software for industrial design, style, autocad or solidworks, will still be necessary for mechanical design

Next: The design method of turbinee