Capture the energy of fluid streams with a propeller system is encountered in many systems of energy production and driving force. 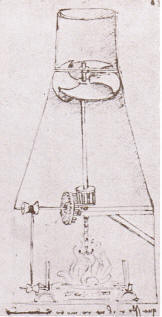 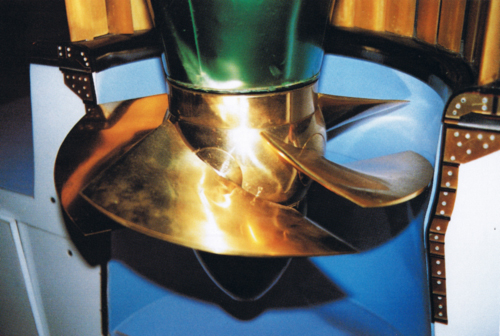 The characteristics of the sensed fluid, air or water, changing some constraints, but the principle of energy conversion remains the same. So before going deeper into the wind turbines, tidal turbines or hydro turbines, we will take stock of this method of energy conversion. Before to engage in the design of the propeller, We must assess the need for energy and compare it to the energy available on the site of implantation.Energy from fluid is kinetic energy. The kinetic energy is the energy of the velocity of an object. The power is the amount of energy per second . in 1 second, the mass(kg) of fluid passing through the propeller = volume(m3) X density(kg/m3) = Calculating the power of the fluid passing through a propeller is : This equation shows us, the actors of the power of our propeller and their importance::

We notice that power is a cubic function of the speed: if the speed is doubled, the power multiplies by eight!

The disc surface swept by the propeller is the best indicator of its potential: 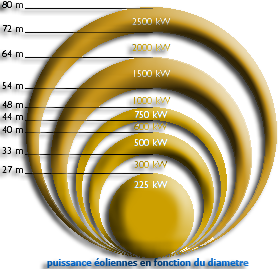 The energy that we can capture:

The essential first loss, due to the fact that to get all the power of the fluid velocity, it would have to remove all its speed as it passes through the propeller. if it stops all fluid entering the impeller, where it puts? It's got to be evacuated from the other side the propeller and this quickly enough to leave space for the incoming air ! So we can use that a part of the power of the fluid stream. More propeller removed from the fluid velocity, the more it slows down the passage and the fluid loses its energy without transmitting it to our propeller ..

theoretical Cp max announced by Betz, ignores losses due to drag and losses at the blade tip. It results from these losses, that the propellers do not exceed 70_80% of the Betz limit. This reduces our max Cp hoped to 0.4_0.5

The surface and the blade length to to give to our propeller can be found to provide the desired power if the wind speed is known and the estimated performance (Cp) : disk_area_m2= blade length ² x3.14 Assuming an optimistic Cp 0.4: Whether for a wind turbine or tidal turbine, we know how to calculate our blade length, depending on to desired energy, and to energy of the fluid. We will now look at the combination of speed and fluid velocity: The operating point of our propeller