The wind motor can run, either directly or via a multiplier, three types of electric generators::

that process, excluding losses in the generator, the mechanical energy..

Generators are in charge of converting the rotational mechanical energy into electrical energy, how? With the phenomenon of induction. In fact, any movement of a wire in a magnetic field induces a current in the wire. The same happens if the driver is fixed, and the magnetic field is variable. It is this principle that is used by the generators. They are mainly composed of two parts: the cylindrical rotor which produces a variable magnetic field, And the stator, which generates electric current.

The machine has 2 parts: 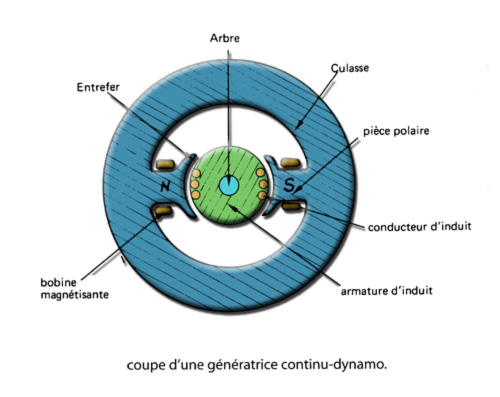 To recover this energy, the armature has a commutator. The collector of the dynamo shown simplified below includes 2 isolated 180 areas °: 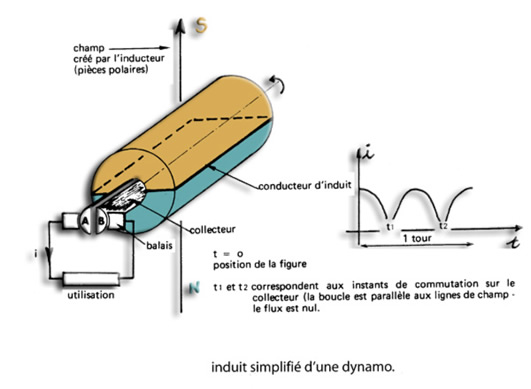 Two brushes, located one opposite the other, are successively in contact with the area A and area B, which allows current to always keep the same direction in the use. In reality, the collector has a large number of sectors corresponding to a large Number of cores. But the role is the same: make a current in the same direction in all strands beneath a pole. Considering that the flow produced by the magnetizing coil is constant , (Machine compensated) the current supplied is proportional to the rotational frequency. The relation between the terminal voltage of the machine and the current is:

These generators produce a current, whose frequency is identical to the network. For this, the speed of the wind turbine must be constant. The rotor magnetic field is generated by a current of excitation. This is provided by an independent source (other dynamo operation, storage battery) ; There is then a dynamo called separately excited, But more generally, the machine itself provides his excitement using capacitors, it is said to be self-excitation

The machine has 2 parts: 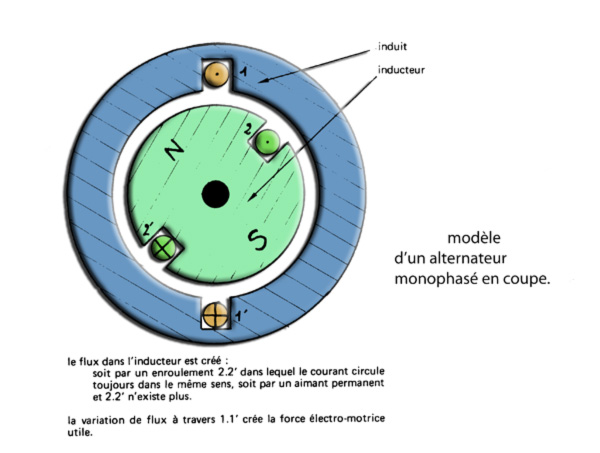 they combine the simplicity, robustness and low cost. The rotor is most often consisting of two circles connected to each other by bars, The wheel as a squirrel cage. The network provides to the a three-phase stator, which generates a rotating magnetic field. When the rotor rotates, an induced current will appear in the bars of the wheel. This creates another magnetic field that one variable. It is only when running at a higher speed than the synchronous, from 1% to 2 %, that it then provides power to the network. The generator needs to be supplied with reactive current (90 ° phase shifted) to maintain the magnetic field of the stator. It has for that a capacitor bank.

To convert wind energy into electrical energy, the generator, whether synchronous or asynchronous, can supply power directly to the network.. This implies that the turbine rotates at a fixed speed. To increase the efficiency of the generator, the speed of the wind turbine must be variable in order to be adapted to the wind. Three basic circuits are then used which rely on one or other of the generators. 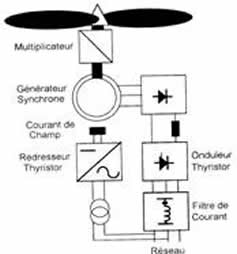 By reducing the magnetic flux can reduce core losses and the loss of windings.. However, in some specific power. this decrease induces a voltage drop, and leads to higher current output of the generator, and therefore, higher losses in the resistors.It is necessary therefore to balance the two losses and thus maintain maximum efficiency of the turbine. The total losses can be lower than for a synchronous generator. If they still largely dominated the market, variable speed generators should be increasingly used in the future, even if that it's energy gain can not offset the high cost of the electronics they need, as their key advantage is the low noise level of the wind turbines associated with them..

Example of making an axial flux generator and a permanent magnet