The wind is not a regular and stable energy flow. It varies depending on the season, time of day, the height at which it is measured, the terrain configuration. 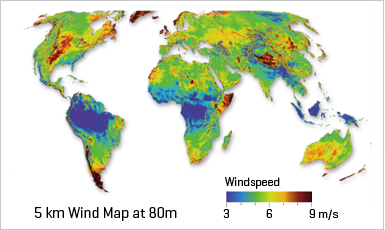 What are the factors affecting the change in wind speed ?

in temperate zones the most frequent winds' s West and South-West, except in the extreme south-east or south-east winds are more frequent Every season is a general direction of winds..

The vegetation on the ground is also a good indicator of the prevailing winds:

The wind maps give the wind at heights from 10 meters. The variation of wind speed with height depends mainly on the shape of the ground. These variations can be represented by a simple law of form:

The value of the exponent apha is given according to the nature of the ground:

Example: two-bladed wind wheel diameter of 20 m on a 30 m tower. When the blades are vertical wind speed ratios at the ends of the blades are two extreme values ​​for alpha: 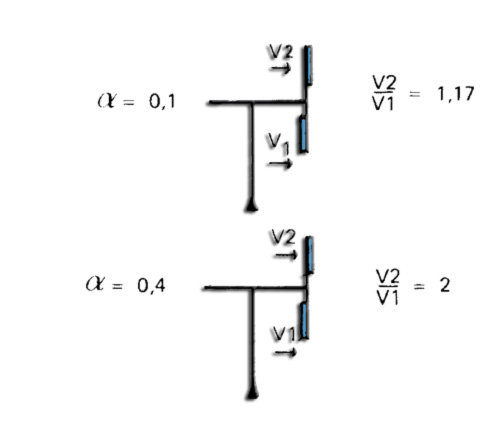 This shows that the most interesting sites are those whose land is less rugged and for which the exponent alpha is low. In addition to the loss of wind near the ground, forcing it to build expensive towers, the speed difference between the high and low ends, creates imbalances in the wind turbine. Vibration and further efforts are then generated. 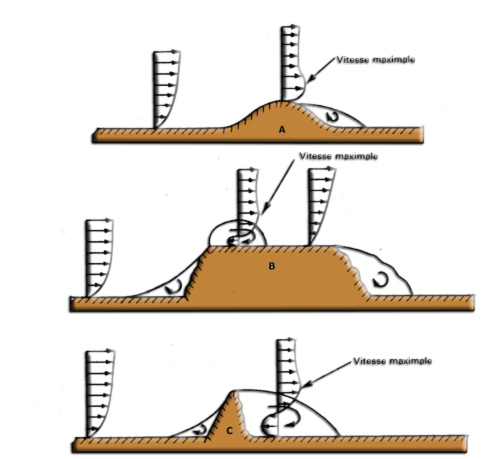 The average wind speed on the site and the energy generated:

We have collected wind data at the site and we consulted the cards for an average wind speed. A ratio taking into account the height was introduced. how much energy will we produce?

The kinetic energy of an object is calculated using the mass and velocity:

If we consider the second time interval as reference, for a wind moving at constant speed, the mass is the volume of air passing through the area in 1 second X density of air. the mass of Wind passing through a surface S is therefore: Mass = velocity ( m/sec) X air_density(kg/m3) X Surface(m²) .our kinetic energy per second is therefore:

Particular attention should be given to the calculation of the power:

Doubling the speed multiplies the power by 8!

Returning to our average wind speed recorded for the site. Suppose for simplicity that the average is calculated over two months with two wind speeds: (take a density of 1.2 and a surface 1m² ) Now calculate first the March power and power in April and perform the average: We find that average power is stronger than the power of the average! This implies that an average wind to make a forecast of power generates under power assessment. More wind data are averaged less accurate we are. To accurately predict the power and energy that we can extract of the site,it is better to make the sum of power generated, to different speeds measured by the shortest time possible. Weather data are valuable and monthly statements are useful. Even with weather data values ​​can vary from 25% a year over the other. The accuracy of predictions should be considered with caution. A windmill farm will have good and bad years.

However, mathematical methods are used to assess the power from the average speeds:Weibull distribution or distribution Rayleight ...

Incidentally, if we consider a surface of 1m ² for power calculations on the site, it greatly simplifies the calculations, from now on we will refer to the power to 1m ². Power per square meter is the power density of the site. We will see that this notion is doubly convenient because in addition to simplifying the power equation, it allows us to directly find the power of the wind turbine by multiplying the power density (power per 1m ²) by the area swept by the wind turbine!

To evaluate the profitability of a wind turbine project: we will compare the money invested and the money generated:

The nominal wind speed of operation of our wind turbine:

As we have seen above, the average wind speed is found on maps or according the measures on the ground. Attention will be paid to the frequency of wind. The choice of the nominal wind speed and the speed of rotation according to:

Once the blade has been built twist can not be changed. A variation of the pitch is possible but the twist should have been optimized for wind speed (rated wind speed) and rotation (operating point) chosen.