Blade element momentum theory is a theory that combines both blade element theory and Froude momentum theory. The Theory of Froude , allowed us to do relation between lnduite axial velocity and thrust force. This theory, assumes that the flow undergoes no rotation, and does not give us indication shape to give our blade..

In reality, the law of conservation of angular momentum requires that the air must have a rotary motion, so that the rotor can extract an outputTorque. In this case, the direction of rotation of flow of the air is opposite to the rotor..

Blade element momentum theory, builds on the results of the theory of froude to estimate the elementary axial force (relative to an element), and introduced performance profiles distributed by elements along the blade.The introduction of the rotational movement of air allows the model to better approximate the reality and get the induced velocities tangential and axial component brought by the theory froude using the variation of momentum induced velocity, thus more reliable results. The introduction of performance Cx and Cz profiles allows to determine the geometry and build a real blade.

Fig.1 shows the rotor rotating at an angular speed (a), moving at a
speed V, in the air A sectional view of part of a blade width dr, located at a
distance r from the axis of the rotor, is shown in Figure 2

The figure illustrates the fact that the blade element is not subject to a flow, having a resultant speed, which depends only on the speed, and the rotational speed (Vr = V + wr), but a speed of "Ve" entry influenced by the induced velocities wt tangential, and axial wa. Using relations addition of forces along the axes in the plane of rotation and the axis of rotation of the rotor, it is possible to establish the equations of thrust and torque absorbed by an element of width dr, of a blade :

In these equations, and dD dL elements are forces acting on the profile, These forces can be calculated using the lift coefficient (CL), the coefficient of drag (Cd), chord (c) of the profile to the local radius (r) of the blade, thikness of annulus dr , p(rho) kg/m3

By analogy with the theory of Froude, the thrust generated by the ring is :

By combining these two equations, matching the thrusts generated by the rings can be developed following I'équation: 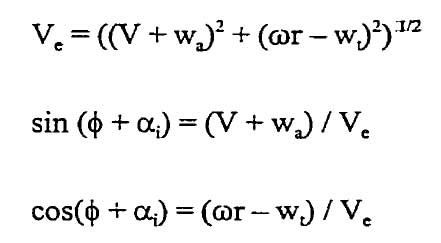 Equation 7 is the first of a system of two equations with two unknowns as unknown wa and wt, used to solve the velocities induced by the rotor blade ...