The edition graphics performance of the propeller or wing :

A series of graph showing the performance of the propeller or of the wing, at speeds of rotation (for propellers), or fluid (for wings), allow to reflect on the strengths, powers or efficiency of the system:

Or under the tab 3:Optimize, use the "multiple analysis" button

It remains only to start the analysis.Graphs can be saved, a "compare" graphic used to display the selected curves, data calculations can be recorded as text or spreadsheet ...

Ranges selected test can give results that completely out of the mode of operation of the propeller and give such negative returns: below for example, the rotation speed range tested for this thrust propeller, tells us that in the fluid velocity of operating point of design (2 m / s) ,our propeller has a propulsive efficiency of 0.2 at 140 rpm,But at 60 rpm performance is negative, our propeller operates in energy harvesting ...

Research of the actual rotational speed (point of operation) for electric motors and generators coupled to the propellers: In 2 cases, the actual rotational speed of the system is determined by the balance of the resistive torques and torque motors. To quickly see what will be the operating speed of your system: generator / turbine or motor / propeller, Simply place on a same graph, the torque curve of the propeller, and the torque curve given for the motor or generator.To facilitate graphics resolution, of the actual operating point of the system, it is possible to insert your torque curve (provided by the manufacturer of the generator or motor) and make it appear superimposed: 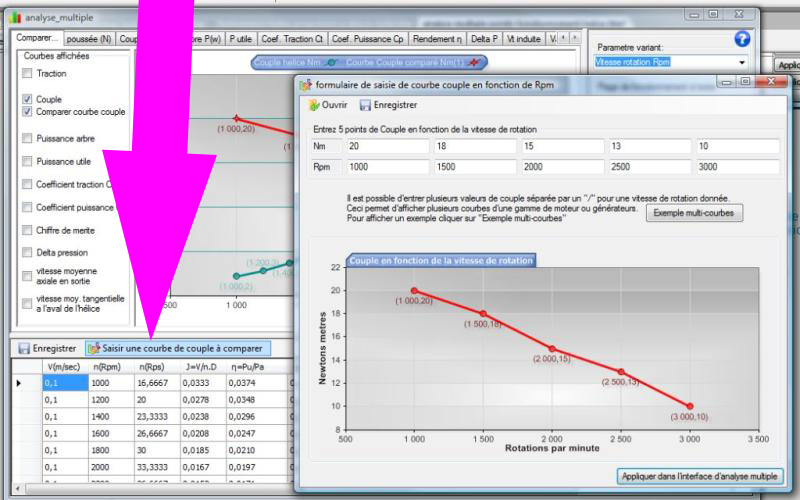 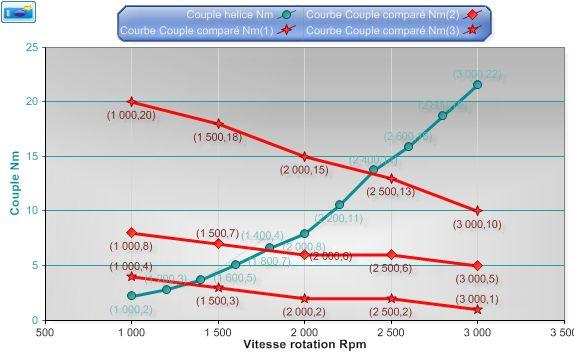 So here we find that: We can also overlay performance data and thrust to know the performance of the system in all three cases:

ISo here we find that: Of course these values ​​are valid only if the propeller has a strength appropriate to the calculated thrust, and that cavitation does not spray fluid. We must therefore control these parameters, at speeds of rotations found!