software calculation Design: propeller turbine, screw, aerial, marine, turbine, tidal, wind, kaplan, foil, wings, 3D. Discover heliciel software:
The induced velocity in computing the twisting of the blades of propellers and turbines
The induced velocities are essential for the definition of twist in the blade. Even if the user Heliciel software does not need to master this concept, knowledge of the phenomenon participates in the understanding of the calculation method.

This brief description, therefore gives a first idea of induced velocities, for detailed formulas, I invite you to visit: propeller calculations detailed theories

The phenomenon of induction:

Induction is sometimes given in the corresponding coefficients applied to speed: : In these figures, Wa and Wt are respectively the axial and tangential induced velocities. 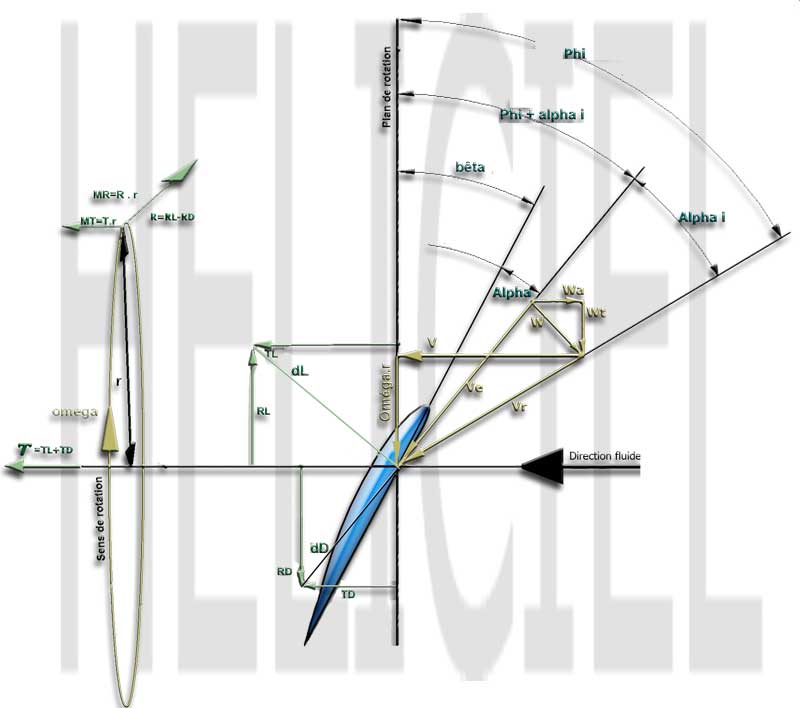 Imagine situations for visualize the reality of the induced velocity (positive or negative):: For example, if the apparent velocity is calculated by combining only the rotational speed and the speed of fluid far upstream of the plane, stopped on the track,we have no axial velocity component. However, front of the propeller, an axial air movement is indeed present, and even dangerous, because it can draw us into the propeller! This air movement is induced by the propeller. It must be taken into account in calculating the twist to ensure that the incidence of the profile is properly valued. For more information, a short detour on the side of calculation methods and theories, will inform you on induced velocity and its calculation. The difficulty of calculating the induced velocities lies in the inter-dependence of induction and performance profiles: This induction is caused by the drag and lift profiles, but the drag and lift are modified by the induction.... We must solve the equation system which verifies the drag and lift, depending on the speed further upstream, and the rotational speed.

to assess the induction, Heliciel uses blade element method coupled with the vortex theory (bem) and proceeds by Newton method to converge to a result.

Naturally, the software tool Heliciel calculating these speeds to create the optimum twist in your propeller, it remains that to use 3D files to create the propeller's prototype .

The tangential induced velocity can also also affect the shape of the profile:

The fluid path is bent by the change in tangential velocity between the leading edge and the trailing edge. This curvature of the stream fluid changes the camber profile relative to the fluid. To preserve its theoretical camber, the actual profile should be deformed depending on the curved path of the fluid.

The software Heliciel applies this geometric correction to the 3D model, and export 3D:

Example of correction of a profile to keep the theoretical camber at the foot of a blade axial fan: 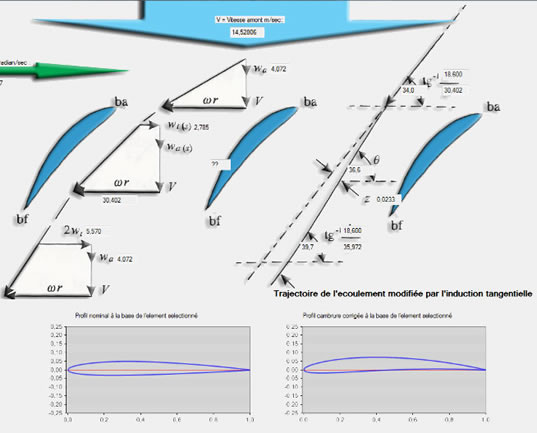