The calculation and design of an axial fan for a blower or ventilation sytem aeraulic is to dimension the diameter of the fan, the number of blades, the speed of rotation, the hub diameter and the twisting of the blades as a function of delta total pressure of the fan to be provided to compensate for pressure losses of the ventilation system ..

The flow (Q) being constant to minimize the turbulent losses, the hub will be sized and leads to better adjusting S0 S1 and S2 to the speed variations (continuity Equation) The enlargement S3 decreases the speed (V3 = V0) and transfer the dynamic pressure into static pressure (Bernoulli).

Heliciel includes a "Wizard ventilation". This tool greatly facilitates the design of axial fans axial flow according to specifications aeraulics type loads. Just enter the flow of the system and adjust pressure parameters to create the custom fan and edit operating curves (yield, total pressure delta), depending on the flow.

This "Wizard fans" has been specially designed at the request of ventilation consulting firms and ventilations designers, as a way to master independently the total design of their systems ventilations.

A study by design approach feasibility of velocity triangles, depending on the pressures and flow rates required, allows pre-size the blades, before creating the final 3D modeling.

The theoretical sketch automatically updated by heliciel, shows the angles of entry and exit of the fluid levels of diferent radii of the blade. These angles are determined by the velocity triangles to the inputs (points1) and outlet (points2) of the profiles:

Euler and Bernoulli equations show that the increase from applied pressure, is performed by the variation from speed between the input and the output. These relationships are theoretical, because it assumes that the fluid is perfectly guided by the blades, infinite in number, having an infinitesimal thickness. Here we use this simplified approach only to validate the feasibility of the parameters. To model the propellers, Heliciel uses another method integrating performance of the profiles: the method of blade elements and amount from movement coupled to the vortex theory, to define the optimized twist and the final performance of the project in accordance with the selected profiles.

The ambition of this fan creation wizard axial propellers, is to improve the energy efficiency of ventilation systems and lower operating costs by providing technicians, draftsmen and designers an easy to master and corresponding to the standards of specifications encountered in aeraulics.

The fan generates the "Dpt" (Delta's total pressure, static + dynamic) equal to the total consumed by the flow pressure at the given flow. Here are 4 examples (images MECAFLUX Pro3D) at the same flow and same fan diameter:: 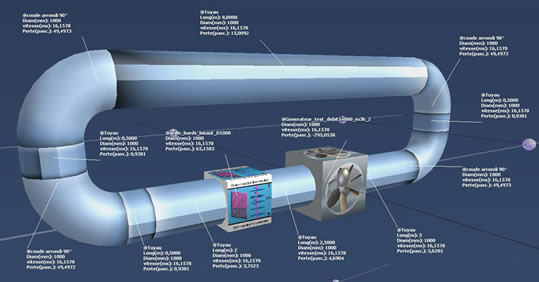 Some recommendations of implementations to avoid performance loss: 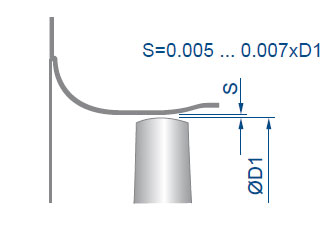