The study of resistance to the advancement of hulls, allows you to predict the power that will be needed to move at a given speed. The force of resistance to the advancement allows to evaluate the power of the engine or sails that allow movement of the vessel. This is true for all types of vessels: ships, aircraft, submarines, hydrofoils or airships, moving horizontally with a straight path. It is possible to study the aerodynamic performance of an airship , the hydrodynamic performance of a submarine or a boat hull using the software Héliciel. For this we consider the airship or submarine ,consists of two symmetrical half-wings very short whose profiles are of decreasing length. Select from the File menu of HELICIEL software model airship or submarine, for example starting you'll just have to change the dimensions and sizes..

Here we loaded the model airship project but we could have chosen a submarine.To calculate the hydrodynamic performance of a boat hull, select the model submarine. 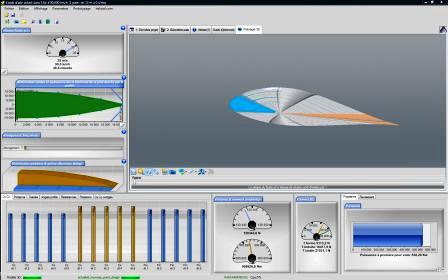 The drag and lift of the submarine or airship, are given with a distinction between form drag and total drag which included the drag caused by lift. The power supply to propel this half hull at the selected speed is displayed in the result area, bottom right. ATTENTION, performance models are given for half hulls ,It will therefore double every power values​​, drag and lift for the performance of a hull airship or submarine Complete Set..The surface roughness is considered polished aerodynamic. It is possible to use the software mecaflux for calculating the drag on a rough surface, if you want to integrate the drag due to hull roughness upper polished aerodynamics.. It is possible to export to 3D IGS half hull and its symmetricalto create a model in software cad type solid works. To export to IGS size half hull boat, airship or submarine with the software HELICIEL, use the file menu / export to IGS Format: :

To create the symmetric hull which enable the construction of the complete assembly, use the option "half left wing or right wing half in the prototype 3d tab: 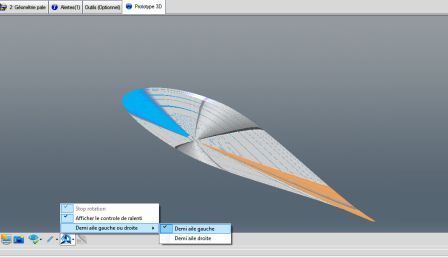 after you export the two files of the hull left and right airship (or submarine) in IGS 3D format,simply assemble them into your CAD (Solidworks Here) software:

Here we have created an airship lift, that is to say that its speed tends to make climb because the model profile is not symmetrical. If we want an airship or submarine hull without lifting effect, or a boat hull, we must use a symmetrical profile. To quickly select the symmetric profiles in the database profiles, use the "tab to search / find symmetric profiles.