Study of a boat hull shape

The study of the forces of resistance on a boat hull shape allows to evaluate the propulsive force that will serve to advance to the desired speed. The force resistance to forward (expressed in Newtons) is opposed to the ship. This force may be measured by towing the vessel. Propulsive force equal and opposite will be provided by the propulsion machinery to maintain the speed of the ship. As it is not possible to tow a ship that is not yet built, this it is necessary to formulate a practical and accessible method giving the designer and shipbuilder concrete design elements of the propulsion machinery.

We owe this idea Froude study Separate the viscous resistance (Rv), from the wave resistance (Rw) and aerodynamic resistance (Ra). The separation of forces composing the total resistance may seem questionable because it interact with each other (the formation of a wave along the hull shape changes the wetted surface and hence the frictional resistance). But if we take care to assess this interaction distinguishing different wave regimes, it provides us with useful results to draw the hulls of boats.

There is a relationship between the length and between two crests of a wave (L meters) and velocity (V m / sec) given by::

Incidentally, as it is possible to determine the energy contained in a wave by the equation: E (joules) = (1/8) x density (kg/m3) x 9.81 x H ² x L, we could estimate energy absorbed by the waves observed..

We noted earlier that it is possible to determine the energy contained in a wave by the equation: E (joules) = (1/8) x density (kg/m3) ² x 9.81 x H x L, we can estimate that the wave resistance will be strong if system wave generated by the displacement of a hollow (H) important. The combination or cancellation of waves thus indicates peaks or troughs in the wave resistance:

These values ​​correspond to a remarkable series of Froude number:

That we can place on a curve of wave resistance: 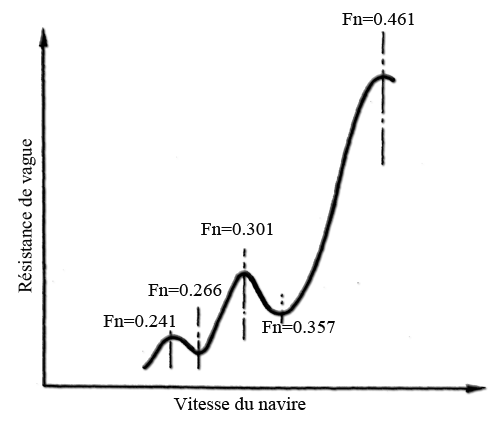 The wavelength corresponds to the length of the hull shape, the wave REAR is canceled by the bow wave. This is the theoretical maximum speed for which the hull shape was designed. The vessel is in its wave, a crest on the front, a ridge at the back and the hollow in the middle. The speed increase is accompanied by a sharp increase in wave resistance: Froude number > 0.4 :

Froude number between 0.4 and 0.5 The ship goes on the crest of the bow while the hollows approaching the back. angle appears. This is the worst situation and the most costly in wave resistance which can reach 85% of the total resistance to progress. The ship presents a surface area increased by angle. The resistance curve rises to a maximum arrow has Fn = 0.461 Froude number > 0.5:

The ship is on the crest wave of bow and clears the bow. while finding a horizontal position. This is the area of lightweight planing hulls equipping ships. A flat surface on the back is scheduled to take support on the wave without the press and hold the maximum hull out of the water. The wave resistance decreases sharply. Overall methodology for calculating resistance to the advancement of hulls.Consider a plane and infinite calm water. We neglect the aerodynamic resistance. Method of calculationl: